I love children's books, and maybe you do too...

Here are videos to all the 17 children's books listed in the pre-K-K Kindness Curriculum so generously provided to us by The Center for Healthy Minds, University of Wisconsin.

Two of my favorites, I'm the Best by Lucy Cousins (5/17) and Moody Cow Meditates by Kerry Lee MacLean (7/17) are also suitable for older children (and grownups). Little ones love the musical rendition of How Kind! by Mary Murphy (15/17).

Video: Sumi's First Day of School by Soyung Pak - 1/17
Theme: Growing Friendships with Kindness
Video: A Quiet Place by Douglas Wood - 2/17
Theme: Quiet Emotions on the Inside
Video: The Listening Walk by Paul Showers - 3/17
Theme: I Can Notice Things When I Am Quiet Inside
Video: Quick as a Cricket by Audrey Wood - 4/17
Theme: Different Emotions Feel Differently on the Inside
Video: I'm the Best by Lucy Cousins - 5/17
Theme: Working with Emotions in a Kind and Friendly Way
(This one's suitable for any age.)

Video: Dogger by Shirley Hughes - 6/17
Theme: Emotions Change Many Times Each Day
Video: Moody Cow Meditates by Kerry Lee MacLean - 7/17
Theme: Busy Mind & Clear Mind: Being with Anger
(This one's also suitable for any age.)
Video: When Sophie Gets Angry--Really, Really Angry... by Molly Bang - 8/17
Theme: What Can We Do When We Are Upset?

Video: Down the Road by Alice Schertle - 9/17
Theme: Forgiving Myself ~ Forgiveness

Video: Gracias Thanks by Pat Mora - 10/17
Theme: Gratitude for People or Things in My Life & All That We Have

Video: Can You Say Peace? by Karen Katz - 13/17
Theme: People Around the World Want Peace 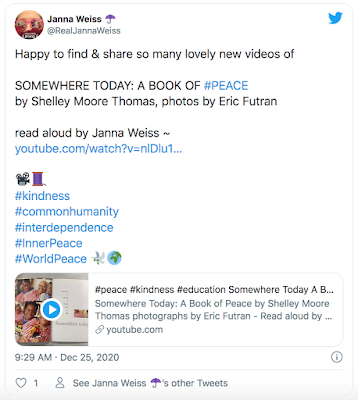 Song video: How Kind! by Mary Murphy - 15/17
Theme: Interdependence - Passing kindness on to others

Video: In My World by Lois Ehlert - 17/17
Theme: Gratitude & Caring for Our World
The Kindness in the Classroom - Kindness Curriculum Overview video (first video above) and related videos can also be viewed and downloaded here: https://thinktv.pbslearningmedia.org/resource/71603754-9eeb-4701-b7c5-c19df61bb919/kindness-in-the-classroom/
Videos of all the Kindness Curriculum books are also posted in this Twitter thread: 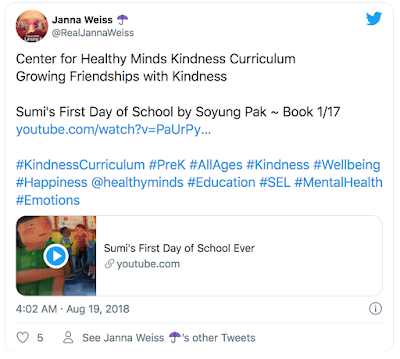 To see the Twitter thread, scroll down to find all the tweets. Where videos have been removed, I've added active links in the Replies. To see those, open the individual tweet (by clicking on the date). Twitter is public and anyone can view it.
May 2021 be a year of kindness, compassion, inner peace and healing for all humanity, all sensitive beings and the earth.
Posted by Janna Weiss at 8:27 AM No comments: 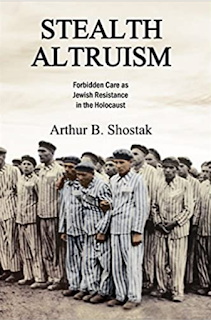 “The most important thing is the heart.” Of all his works, articles and books, Professor Arthur Shostak would no doubt want to be remembered for his most recent book, Stealth Altruism, on the Holocaust stories we haven’t heard, on the brave hidden acts of kindness by Jews in the concentration camps.

Arthur Shostak is virtually unknown in Israel. An online search with ‘Arthur Shostak’ in Hebrew gave only one result* - a prophetic and utopian quote about an evolutionary gap that exists between our hearts and technological development, with a call to close this gap:

“Today we have access to very advanced technology, but our social and economic system does not match our technological capabilities that can easily create a world of abundance, a world free of bondage and debt, for all in this world.” Dr. Arthur B. Shostak, Sociologist (back-translated from Hebrew)
http://edu.arvut.org/session-9

Shostak’s quote is reminiscent of the words of the Dalai Lama: “I find that because of modern technological evolution and our global economy, and as a result of the great increase in population, our world has greatly changed: it has become much smaller. However, our perceptions have not evolved at the same pace; we continue to cling to old national demarcations and the old feelings of “us” and “them.” His Holiness the 14th Dalai Lama, An Open Heart: Practicing Compassion in Everyday Life

It’s a good idea to pay attention to them. Evolving and healing the heart requires study, thinking and deep reflection on kindness and compassion, and developing concentration to a high degree through mind training, in order to internalize these values at the most subtle levels of mind, deep in the heart. 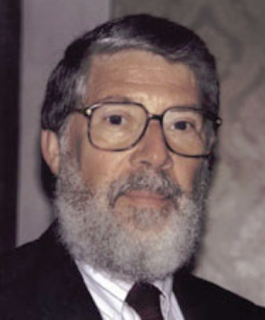 Arthur Shostak, age 83 (May 1937), is a renowned American sociologist who taught for 42 years, 1961-2003. From 1967 until his retirement from teaching at age 66, he taught at Drexler University in Pennsylvania. Shostak is an applied sociologist, professional futurist, labor educator and public speaker. He has written and edited 34 books and continues to write. After retiring, he traveled with his wife to 35 countries.

Shostak was inspired to write Stealth Altruism while visiting 48 Holocaust memorial museums around the world, where he discerned “the regrettable absence of attention” to the subject of kindness and the humble, heroic and life-saving acts in the camps, despite the horrifying conditions. In the course of writing the book, he read 195 memoirs of 178 survivors and in almost all of them he found stories of stealth altruism.
Art Shostak's bio on Amazon

It is hard to imagine an American whose grasp of the Holocaust could not be significantly improved by reading just three pages (pp. 106-109) of a memoir written in 2001 by survivor Ruth Kluger. In 1942, when she was just 12, Ruth was a minute or two away from being casually commanded by an SS officer to join a line of nude females to soon die of asphyxiation in a KZ Auschwitz gas chamber. Instead she found herself suddenly confronted by a prisoner in her early twenties who had long before been ordered to serve as a “Selection” Recording Clerk. 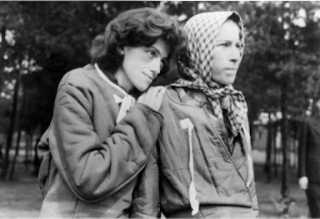 By softly but firmly telling Ruth to lie about her age and claim she was 15, the Jewish Clerk helped save Ruth’s life. When the SS officer decided the emaciated “15-year-old” was just too thin and small to continue to live, the clerk boldly spoke up and called his attention to Ruth’s strong legs as proof that the girl would make a good slave laborer. With total indifference, the SS man casually changed his mind and motioned Ruth over to the line of those females who could struggle to live as slave laborers.

In her memoir, Kluger regards the incident as

an incomprehensible act of grace, or put more modestly, a good deed… I was saved by a young women who was in as helpless a situation as the rest of us, and who nevertheless wanted nothing more than to help me…

She sees in this proof that “even in the perverse environment of Auschwitz absolute goodness was a possibility, like a leap of faith, beyond the humdrum chain of cause and effect. I don’t know how often it was consummated. Surely not often. Surely not only in my case. But it existed. I am a witness. Every Holocaust survivor, she maintains, has a similar story, a “lucky accident,” a “turning point” to which they owe their life.

As horrifying as it was, the story of the Nazi attempt to annihilate European Jewry is not all we should remember from the Holocaust. Stealth Altruism tells of secret, non-militant, high-risk efforts by “Carers,” people who were victims themselves who tried to reduce suffering and improve everyone’s chances of survival. Their empowering acts of altruism remind us of our inherent longing to do good even in situations of extraordinary brutality.

Arthur B. Shostak explores forbidden acts of kindness, such as sharing scarce clothing and food rations, holding up weakened fellow prisoners during roll call, secretly replacing an ailing friend in an exhausting work detail, and much more. He explores the motivation behind this dangerous behavior, how it differed when in or out of sight, who provided or undermined forbidden care, the differing experiences of men and women, how and why gentiles provided aid, and, most importantly, how might the costly obscurity of stealth altruism soon be corrected.

To date, memorialization has emphasized what was done to victims and sidelined what victims tried to do for one another. “Carers” provide an inspiring model and their perilous efforts should be recognized and taught alongside the horrors of the Holocaust. Humanity needs such inspiration.


🕊 May peace prevail on earth.

*Note: After this post was published in Hebrew on The Marker Cafe (April 18, 2020), Google search results for Arthur Shostak improved a bit and I found a Hebrew article in “e-mago” that mentions his research on blue collar workers: Rivka Shefek Lisk, 2010, The Post-Industrial Age: Can Abundance Become the Social Norm