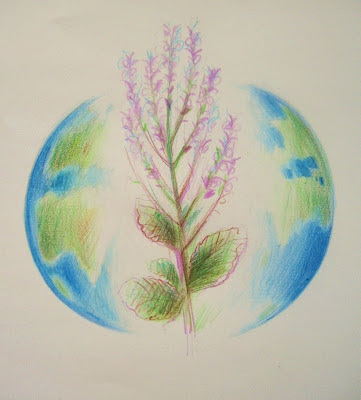 Healing Ourselves & The Earth Together 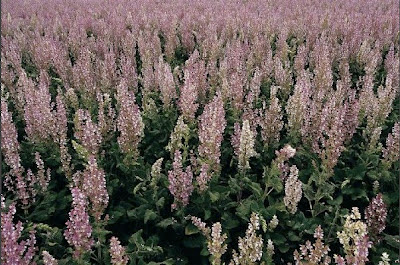 Dear Friends, Marvalous, the company that distributes clary sage Omega-3 seed oil, is currently in court proceedings intiated by its distributors and others. The science and information regarding clary sage Omega-3 is accurate. I can no longer recommend purchase of the product. March 3, 2013

I've been a health professional for almost 30 years. Quite honestly, this unique clary sage Omega-3 makes me feel as if we're living in China during the discovery of ginseng, or the discovery of caterpillar fungus in Tibet. Clary sage Omega-3 is a wonderful herbal product, a cold pressed Salvia sclarea seed oil that has a whole body systemic effect, so it produces extraordinary results, in people of all ages, with a wide range of problems.

For a year, I suffered chronic shoulder and arm pain from a torn muscle or ligament. Acupuncture, massage, herbs, exercise, rest - nothing helped and it only got worse. I had difficulty using my arm for ordinary tasks. After a few weeks of clary sage Omega-3 my pain-free range of movement began to increase. After 2.5 months of clary sage Omega-3, two capsules per day, my son and I tossed a basketball for close to an hour, including hard and far throws in every direction, and my shoulder was completely pain free. My improvement continues steadily.

Omega-3 fatty acid is an essential nutrient for every cell in the body, as Omega-3 fatty acids are components of all cell membranes. Most human diets today are deficient in Omega-3. These two facts also explain the Omega-3 systemic effect on all bodily systems for such a wide range of disorders.

Recent research indicates that vegetal Omega-3, ALA, is an essential nutrient in its own right. The body also breaks down ALA to DHA or EPA as needed. Vegetal sources of Omega-3 include: leafy green vegetables, soy, grains, walnuts and more. Higher concentrations of Omega-3 are found in chia seed, flax seed, and purslane.

The multi-billion dollar fish and krill oil industries share responsibility for decimation of the fish population and the marine environment. Fish oil is also contaminated with PCB, mercury and other heavy metals. Therefore, fish and krill oils are no longer viable choices for Omega-3 dietary supplementation.

An Israeli agricultural scientist discovered clary sage seed oil to be a rich source of stable Omega-3, as well as over 100 other secondary compounds, including Co-Q10 and all types of Vitamin E. Clary sage seed oil is an alternative to traditional fish oil.

I'm a biologist. I've been taking Marvalous for more than half a year and I'd like to tell what wonders it's done in my life, and in my granddaughter's life.

Before I tell you about the magic of the Omega-3 from Salvia sclarea oil, I would like to mention that I religiously took Omega-3 fish oil 1000 mg per day for more than ten years, and when I started taking Marvalous Omega-3, only then did I realize the extent to which my body was hungry for the right Omega-3, that's right for the body.

In the first three weeks, I had gynecological changes that I won't describe here, and and my arm opened up, the movement in the shoulder. I had the beginning of frozen shoulder, due to inflammation. Now I can move my arm back.

After a month and a half of taking two capsules a day, my dosage of Eltroxin - I take Eltroxin because my thyroid doesn't work so well - I took 5.5 pills a week, and now I've gone down to 4 pills a week. That's a very significant reduction, more than a 20% decrease in the Eltroxin dosage.

I had papilloma growths here [strokes her neck] and they fell off, they're falling off, not all, but most of them. The one's that are still on the neck aren't growing. I don't need to... I had to go to the clinic every three months to have them removed with liquid nitrogen. I've stopped going, for more than 6 months I haven't needed to have these growths removed.

My life is filled with joy. You're invited. 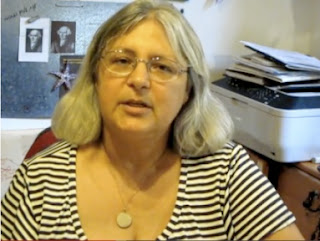 Miri Schrangheim, homeopath, immune system / allergens 1:05
Hi, my name is Miri. I'm 55 years old. I'm a veterinarian and a homeopathic physican. I want to share a surprise I experienced from taking Salvia sclarea Omega-3. My husband and I each took two capsules every morning, since, based on our knowledge, Omega-3 can help the body to lower cholesterol.

The surprise came a week ago, when my husband got his blood test results. Compared to his tests two years ago, his allergen values dropped by half. And what we experienced before we got the results... for the half year he's taken the Omega-3, he's had no asthma, no migraines, and no itching - and that's amazing. 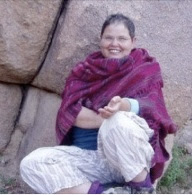 1. A 64 year old man with renal insufficiency, after a month with 4 capsules per day all his blood values improved. He's much more energetic.

2. A 2.5 year old boy with a rare liver disease, 6 months with [clary sage] Omega and the liver returned to normal function.

3. A religious woman with ten children. After her sixth birth, her thyroid gland was damaged. She took Eltroxin for 12 years. Today, with 6 capsules of Omega, she is completely free of Eltroxin and is balanced.

4. A 12 year old girl with childhood Type I diabetes. A few months with Omega and she's completely free of medications."

Naomi herself no longer suffers from hair loss, and her hair has grown back.

A Feeling of Mission: Testimonial Videos

Acknowledgement
I am grateful to many distributors and to the many people who have taken Marvalous, for enabling the creation of this page.


You may also enjoy reading:
Business & Marketing with the Altruistic Intent: Mental Health

Ethics for any human being - basic human values


I would like to acknowledge Dr. Nativ Dudai, Volcani Institute, Israeli Agricultural Research Organization, and the Neve Ya'ar research team, for their kindness, dedicated research, contribution to humanity and the Earth.


For the scientifically minded
Alpha-linolenic acid and its conversion to longer chain n-3 fatty acids: benefits for human health and a role in maintaining tissue n-3 fatty acid levesl. by Gwendolyn Barceló-Cobijn, Eric J Murphy. Progress in Lipid Research (2009) 48:355-374. http://www.ncbi.nlm.nih.gov/pubmed/19619583 Dispels the popular belief that ALA is 'not as effective' as fish oil.