Tibet Is a Major Global Issue 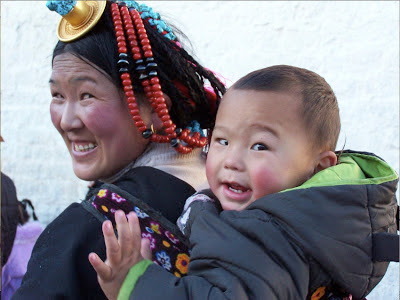 Janna Weiss:
Hello, Mr. Hamilton.
It's a pleasure to speak to you.
I appreciate WBAI very much.

Janna Weiss:
I'd like to talk to you about the Tibetan issue, which is one of the most critical and important global issues today, which is really absent from the public discourse.

Janna Weiss:
95* Tibetans have self-immolated within Tibet because they are suffering really brutal oppression for over fifty years with no freedom of religion and really a cultural genocide that is ongoing.
And there are 10,000 Tibetans living in New York, and it would be great to give voice, I think, to the issue.

The issue is a global issue for environmental reasons... for three main reasons. One is the environmental issue. Tibet is considered the Third Pole of the world. The Himalayan snow is the source water for the.. the ice caps of the Himalaya are the snow [source] for drinking water for about 10 major Asian rivers, for 60% of humanity, and they're melting at an extraordinary rate due to inappropriate human activity - mining and damming and so forth.

Janna Weiss:
They're in the process of displacing and settling 1.4 million nomads who live in harmony with the environment and tend the pasturelands of Tibet. And Tibet is beginning to undergo desertification and 1.4 million nomads will have nothing to do in cement houses.

Hugh Hamilton:
That's the first issue, you said. You said there are three reasons.

Janna Weiss:
There are three. Yeah.

Janna Weiss:
The second one is non-violence, and if we really want to promote peace in the world, then we really need to stand behind the non-violent path, and the non-violent struggle of 6 million Tibetan people who live in the high plateau. And so.. to encourage dialogue and peaceful resolution of conflict, and to send a strong message also to communities where they may be less committed to non-violence as the Tibetans. That's the second issue.

And the third issue is the aspect of health.
Tibetans are world experts on mental health.
In fact, mental illness is rare in Tibet.
And they've been collaborating, the Tibetans, and Tibetan meditation masters, with neuroscientists, for over two decades now, with Mind and Life Institute, and The Center for Compassion and Altruism Research and Education - CCARE at Stanford, and Richard Davidson's research at the University of Wisconsin Center for Investigating Healthy Minds (CIHM) www.investigatinghealthyminds.org and so forth, and Harvard.
And there's no question that a practice of ethics stands at the foundation of mental health and peace of mind, and the less stress we have, as the result of meditation and the practice of ethics, then also, we have better physical health.

Hugh Hamilton:
I'll tell you what. I'll tell you what.
You've made a very... You've made a very compelling case, and you've articulated very well, and very clearly, several of the reasons why this is such an important issue, the Tibetan issue, and I have taken this on advisement. If you are able to do so and you can, send me a follow-up email, I'd be more than happy to... I'd be more than happy to communicate with you further on this...

Hugh Hamilton:
...Because it seems to me as well that you might be able to make a contribution to the conceptualization of such a segment based on your knowledge and expertise in the field. So, please do send me an email when you have a moment to do so. Put "Tibet" as your subject, and I look forward to hearing further and to working with you to bring the issue to the air. Okay?

Janna Weiss:
Thank you so very much.

Hugh Hamilton:
You are very welcome. Thank you very much indeed.
~  ~  ~

Thank you for the opportunity to share about Tibet yesterday on Talkback and for your kind response.

As I mentioned, Tibet is a major global issue. I believe that resolution of the Tibetan issue is key to resolving global corruption, from which we all suffer.
At least 95 Tibetans inside Tibet have self-immolated for the return of the Dalai Lama, for freedom for the Tibetan people and for world peace.
6 million Tibetans reside on the Himalayan high plateau and have been enduring a systematic cultural genocide for over 60 years.
About 1,200,000 Tibetans have been killed and over 6000 monasteries destroyed since the communist invasion began in 1950.


What Is China Doing In Tibet? http://www.SolidaritywithTibet.org

Non-violence
Tibetans are Tibetan Buddhists and are committed to non-violence. The democratically elected Tibetan government in exile supports the Dalai Lama's Middle Way approach to peaceful resolution of the longstanding conflict with China through dialogue. Support for the Tibetan non-violent struggle will send a strong message of support for non-violent conflict resolution to communities around the world who may be less committed to non-violence than the Tibetans.

Why Is Tibet Burning? Tibetan Parliament in Exile explains self-immolation http://www.youtube.com/watch?v=1HhKF4_-9g8 (or read the text: http://therealjannaweiss.blogspot.com/2012/12/why-is-tibet-burning.html )

Health
The Tibetans are experts on mental health who mass produced enlightened teachers in a vast network of monasteries for 1300 years, since Buddhism came to Tibet.

Mental illness is rare in Tibet. His Holiness the Dalai Lama and the Tibetan meditation adepts have been collaborating with neuroscientists for close to three decades. Neuroscientific findings conclusively show that Tibetan meditation techniques lead to objective measures of happiness, for example, as determined by strong activity in the left pre-frontal cortex. Ven. Matthieu Ricard, once a molecular biologist and today a Tibetan Buddhist monk, has been dubbed 'the happiest man in the world' and his happiness measure is 4.5 standard deviations outside the bell curve of a control group of 150 non-meditators, for left/right pre-frontal cortical activity (right = unhappy, destructive emotions). Graph from The Habits of Happiness by Matthieu Ricard http://www.youtube.com/watch?v=vbLEf4HR74E attached. 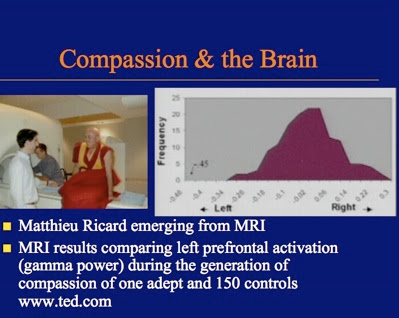 Center for Compassion and Altruism Research and Education http://ccare.stanford.edu

NYC Tibetan contacts
10,000 Tibetans live in NYC. When Tibet is free, the Tibetans will return to Tibet. About 200,000 Tibetans reside in exile.
The Office of Tibet http://tibetoffice.org/
The Tibetan Community of NY and NJ http://www.tcnynj.org/
Tibet House - cultural http://www.tibethouse.org/
Students for a Free Tibet https://www.studentsforafreetibet.org/

~  ~  ~
*As of today, more than 107 Tibetans have self-immolated for freedom.
Please see what you can do: http://www.SolidaritywithTibet.org/outreach

Updated December 1, 2013 - More than 123 Tibetans have self-immolated for the return of His Holiness the Dalai Lama and freedom for the Tibetan people.
Please see what you can do for Tibet:  http://www.SolidaritywithTibet.org/outreach
Posted by Janna Weiss at 4:55 PM