The Dalai Lama in Central Park 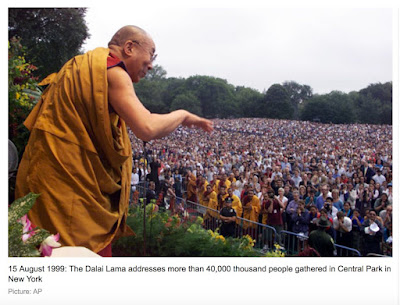 His Holiness the Dalai Lama is one of Central Park’s most notable visitors and speakers. According to the NY Times, His Holiness “made his first appearance in the park in 1991, at a meditation session that drew about 5,000 people.” The Dalai Lama spoke in Central Park’s East Meadow on two occasions, on August 15, 1999, before an audience of 200,000 people, and again on September 21, 2003, to an estimated 65,000 people.

The Dalai Lama’s 1999 public talk in Central Park was sponsored by the Tibet Center and The Gere Foundation. The New York Times published an article at the beginning of His Holiness’ four-day visit to New York that culminated with the Central Park talk. The NY Times wrote:

With 13th Visit, Dalai Lama Has Gone From Obscurity to Celebrity by Barbara Steward, August 11, 1999 https://www.nytimes.com/1999/08/11/nyregion/with-13th-visit-dalai-lama-has-gone-from-obscurity-to-celebrity.html

The full text of His Holiness the Dalai Lama’s 1999 Central Park talk was published in An Open Heart: Practicing Compassion in Everyday Life, by The Dalai Lama, edited by Nicholas Vreeland (2001). The full text [was] also available online in Amazon’s An Open Heart “Look Inside” feature. Regarding An Open Heart, Buddhist scholar, teacher and humanitarian Geshe Pema Dorjee said, “If you read just one book by the Dalai Lama, read this one. It has everything.” 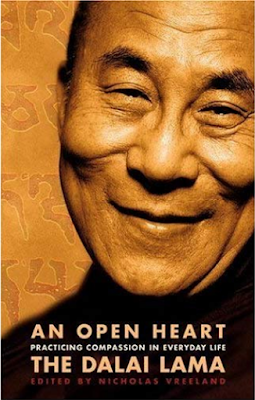 Here’s the description of the extraordinary Central Park event, in An Open Heart:

“Finally, the Sunday morning of the talk arrived. We rather anxiously drove His Holiness from his hotel to the East Meadow, just off Fifth Avenue and Ninety-eighth Street, where he would enter Central Park. His Holiness asked how many people were expected. We told him we would be delighted with 15,000 to 20,000, but we simply didn’t know. As we made our way up Madison Avenue to the site, we strained to look up the side streets to see if there was any sign of people. As we approached Eighty-sixth Street, we began to see the crowded sidewalks and people moving toward the park.

We took His Holiness to the holding tent behind the stage and went to peek through the curtain. We were overwhelmed to see that the entire East Meadow was filled beyond capacity. It was a beautiful and thrilling sight. We later learned that more than 200,000 people had peacefully gathered there. The area was filled with blessings. The rain that had been falling earlier had stopped. With a massive sound system and video monitor ready to project his teachings to the enormous crowd, His Holiness stepped onto a stage decorated with flowers and a single wooden chair placed in the center.

His Holiness chose to speak in English. Through his simple style he inspired all present to engage in virtuous ways. Surely, many of those present generated bodhicitta, the aspiration to attain full enlightenment in order to help others. We might imagine that upon returning home, all in attendance shared the experience with family and friends, thereby inspiring even more virtuous thoughts and actions. Others read about the event or saw it on television. Consequently, millions of people generated good thoughts as a result of that morning in Central Park.”

An Open Heart, pp. 185-187 - this excerpt from the Afterward is also available on Amazon's “Look Inside” 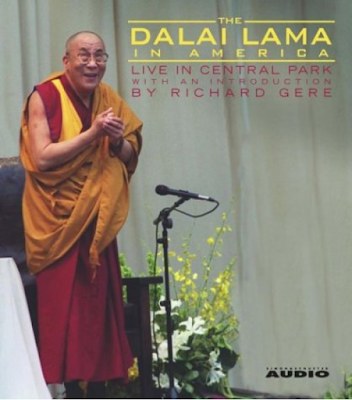 The Dalai Lama in America: Live in Central Park, with an Introduction by Richard Gere (audio, abridged) https://www.amazon.com/dp/0743508998/

Richard Gere:
[His Holiness the Dalai Lama is a religious leader] and a head of state. Since Tibet was a Buddhist country and quite isolated, it had not maintained a modern army. And China’s communist forces very quickly overwhelmed Tibet’s modest defenses by 1950. Until 1959 the Dalai Lama and the Tibetan goverment strove for peaceful co-existence with the Chinese, who had promised not to alter the governance of Tibetan or dismantle its Buddhist traditions and culture. By the mid-1950’s it became clear that China had not intentions of honoring these promises, and rebellions began to break out against the Chinese all over Tibet. On March 10th 1959, a popular uprising erupted in Lhasa, the capital, when it was reported the Chinese planned to abduct the young Dalai Lama. The Chinese suppressed this uprising with brute force, killing thousands, and the Dalai Lama fled into exile with 80,000 Tibetans.

Believing that they’d be able to return soon, they set up makeshift camps in India and elsewhere, and throughout the Himalayan region. But to this day the Dalai Lama has not been able to return, as I’m sure all of you have seen the story in Kundun, the film of last year. Every year, still, thousands of Tibetans escape the repression in Tibet, finding their way over the high Himalayas, mostly in the worst part of the winter, in very little clothes, tennis shoes, thousands make their way — sometimes three, three and half thousand a year - get through. Thousands more die on that journey, but they still continue to try to make this incredible journey out of Tibet.

The exiled government of Tibet is now set up in Dharamsala in northern India, where the Dalai Lama has devoted himself to helping the Tibetan people regain control over their destiny and to continue Tibet’s rich and ancient Buddhist traditions. In doing this, he has traveled all over the world, and his universal messages of compassion and total non-violence have reached an ever growing international audience. In recognition of his efforts and achievements, the Dalai Lama has been conferred countless awards, and honorary degrees, and doctorates, and in 1989 he was awarded the Nobel Prize for Peace.

And as it was stated in the Nobel Committee’s statement, “The Nobel Committee wants to emphasize the fact that the Dalai Lama, in his struggle for the liberation of Tibet, consistently has opposed the use of violence. He has, instead, advocated peaceful solutions, based upon tolerance and mutual respect, in order to preserve the historical and cultural legacy of his people. The Dalai Lama has come forward with constructive and forward looking proposals for the solution of international conflicts, human rights issues and global environmental problems.

Now, just so you know what the program is going to be today, His Holiness will speak for about an hour and a half, you know, the weather willing. The first part of that will be on the Eight Stanzas of Mind Training (by Langri Tangpa, 11th century), which is a particularly important text, and one that is important to all Buddhists. After that, His Holiness will confer initiation, as it were, in a declaration of altruism, and that will be the end of the program. So, it is my great great pleasure now, to introduce to, all are friends, no strangers here, The Dalai Lama.  (Applause)

The Dalai Lama:
Hello. Good morning, brothers and sisters. (laughs) I am here just to share some of our common interests. That is, of course, I believe — every human being, by nature, wants happiness and does not want suffering. And certainly, I believe, the very purpose of our life, is happiness, joyfulness. And then, here, I believe, every human being has the same potential to create inner peace, and through that way, happiness and joyfulness. [end of free audio]

In An Open Heart, the Dalai Lama continues:

Whether we are rich or poor, educated or uneducated, black or white, from the East or the West, our potential is equal. We are all the same, mentally and emotionally. Though some of us have larger noses and the color of our skin may differ slightly, physically we are basically the same. The difference are minor. Our mental and emotional similarity is what is important.

We share troublesome emotions as well as the positive ones that bring inner strength and tranquility. I think that it is important for us to be aware of our potential and let this inspire our self-confidence. Sometimes we look at the negative side of things and then feel hopeless. This, I think, is a wrong view.

I have no miracle to offer you. If someone has miraculous powers, then I shall seek this person’s help. Frankly, I am skeptical of those who claim extraordinary powers. However, through training our minds, with constant effort, we can change our mental perceptions or mental attitudes. This can make a real difference in our lives.

If we have a positive attitude, then even when surrounded by hostility, we shall not lack inner peace. On the other hand, if our mental attitude is more negative, influenced by fear, suspiciion, helplessness, or self-loathing, then even when surrounded by our best friends, in a nice atmosphere and comfortable surroundings, we shall not be happy. So, mental attitude is very important: it makes a real difference to our state of happiness.

I think that it is wrong to expect that our problems can be solved by money or material benefit. It is unrealistic to believe that something positive can come about merely from something external. Of course, our material situation is important and helpful to us. However, our inner, mental attitudes are equally important -- if not more so. We must learn to steer away from pursuing a life of luxury, as it is an obstacle to our practice.

the Light at the End of the Tunnel

is the Twinkle in Your Own Eye!


And here’s the spoiler for Brian Hassett’s radiant “heart-warmer” poem: 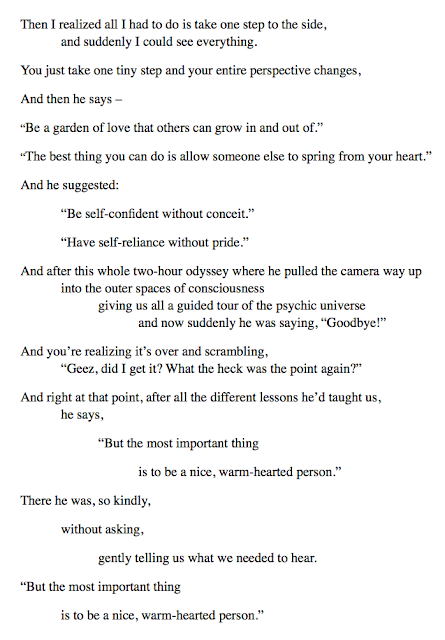 On September 21, 2003, the International Day of Peace, two years after the September 11 attacks, the Dalai Lama once again spoke for peace and nonviolence in Central Park.

The day after His Holiness’ 2003 talk, the New York Times captured, in just a few lines, the Dalai Lama’s humor, humility and key message of compassion, not only for friends and strangers, but also for so-called enemies:

“I have nothing to offer, no special thing,'' he said with a chuckle. ''Just some blah, blah, blah.''

''More compassion automatically opens our inner self,'' he said. ''Too much self-centered attitude closes our inner door.''

Secular Ethics: The Dalai Lama's Vision for a Peaceful Humanity

His Holiness the Dalai Lama is not only a religious leader, but also a great promoter of secular ethics for all humanity. His Holiness' words of peace, compassion and wisdom are a great blessing and inspiration for Central Park employees, volunteers and visitors, New Yorkers, all Americans and all members of our one common human family.

May His Holiness the 14th Dalai Lama of Tibet, Tenzin Gyatso, enjoy long life, good health and the realization of all his holy and extraordinary wishes for inner peace and world peace for all.