Sikyong Dr. Lobsang Sangay, Doctor of Jurisprudence from Harvard University, speaking on religion, religiosity, religionism and constructive secularism, said that there is nothing bad about religion; religion is all good. Calling for a “liberal interpretation of religion,” he quoted Gandhi, "Like the bee gathering honey from different flowers, the wise person accepts the essence of different scriptures, and sees only the good in all religion.‫"‬

I will argue that we all also need "religion," a secular science based path for spiritual development that we follow religiously, and once you understand what these three parts of religion are and how a secular religion is possible, you may agree with me.

1. Moral ethics. We all need ethics and positive qualities such as patience, generosity, a positive attitude towards others including the wish that every being have happiness (an altruistic attitude, universal love) and the wish that every being be free from suffering (universal compassion) in order to be good, positive and happy people. To be good or to be happy means to have a clear conscience, without feelings of guilt or shame or blame, and a relaxed mind in which no negative thoughts arise. It is not possible to develop inner peace without moral ethics, honesty, kindness, love, compassion, patience, generosity.

2. The doctrines of different religions are different. There are believers who believe in God and non-theists who rely on the Law of Cause and Effect, a natural law that pertains to all minds and to all interactions between minds in the universe. (The Law of Cause and Effect also governs interactions between mind and matter.) As a basis for secular doctrine we will rely on science, on Western (Einstein's) science and on Buddha's mind science, where both are based on empiricism and logic.

For example, we all agree that the earth goes around the sun, even though it doesn't look like that.

The possibility of purifying our mind, of turning a traumatized neurotic and/or depressed mind into a calm mind with a sense of inner well-being has been scientifically proven, and also the entire field of science called neuroplasticity, enable us to accept the capacity of the mind to transform and lead to positive changes in brain function and anatomical structure.

3. What is secular culture? Which secular habits and customs are positive and are worthwhile keeping and which are best abandoned in order to achieve happiness? Customs are the recipe for daily life that help us apply moral values (1 above) and the realizations regarding the nature of existence (2 above), and to incorporate these into our lives and our mind.

Since the mind is what's important, clothing is not restricted. You can wear a blue sock next to an orange sock. It's okay to wear a uniform – secular religion is suitable for military people, policemen, prison wardens and guards, doctors, nurses – and politicians, social workers, judges, lawyers and psychologists. It's all right to smell bad and not bathe for weeks or months and it's just fine to bathe twice a day and to use perfume. It's okay for both men and women to use lipstick and nail polish.

Images are allowed: family photos, paintings on the walls in homes. Pictures of enlightened beings are aids to attaining enlightenment. Images of great mind scientists are especially recommended. (The Buddha, Padmasambhava and Je Tsongkhapa are three of the world's greatest mind scientists.)

As much sex as you want is all right, and the more the better – as long as it's by consenting adults – and it's okay to be celibate. Sexual fasting for periods reduces lust and lust is the source of great suffering, like drinking salt water, all the sages have said. It's okay to fill political roles and to be informed about current events, and it's okay and recommended to undertake a “news fast”(according to Dr. Andrew Weil) and to stop consuming commercial media (according to Prof. Michael Nagler, Metta Center for Non-Violence).

Meditation to develop single-pointed concentration is recommended. Without meditation it's not possible for significant changes to take place in the brain. Before one starts meditating, it's advisable to be a good person. 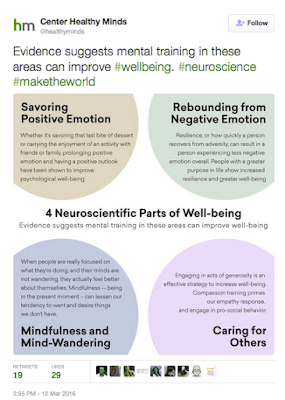 Neuroscientist Prof. Davidson points out four conditions for happiness, for a sense of inner well-being:

Davidson's 1, 2, and 4 belong to Moral Ethics. All four of his findings belong to Doctrines. Number 3, meditation, mind training, paying attention, concentrative ability, belong to the practical or applied area, to Customs and Culture. In this way, secular religion becomes a way of life.

Let us not forget the importance of the teachers – we are grateful to the tradition of Eastern mind science beginning with the Buddha and the Hindu surroundings in which he was raised, educated and meditated. We acknowledge, the lineage of Indian and Tibetan teachers who preserved, practiced and transmitted the Buddha's knowledge, including the 14th Dalai Lama and Prof. Davidson, “the guru of science,” Mind and Life Institute and others.

We will also express gratitude to the contributions of all beings, especially the Western scientific tradition up until the development of the scientific tools that were sensitive enough for Prof. Davidson's Center for Healthy Minds (formerly: Center for Investigating Healthy Minds) and others to carry out their research.

My profound gratitude to Geshe Pema Dorjee, from whom I first heard the expression: “Secular Religion,” that is both absurd and wise.

Secular mind training based on Western science and the science the Buddha taught in order to cultivate a compassionate and altruistic mind and to realize the full human potential that is within each individual for a better and more pleasant world for all.

The three aspects of religion also need to be essential parts of a secular person's life so that he or she will be able to realize his or her full potential:

1. Moral values and cultivation of virtues such as generosity, patience, perseverance, enthusiasm and/or interest and/or curiosity regarding the practice, are parts of religions worldwide and are also essential for secular people.

3. Mind training to cultivate mental concentration has been proven to be one of the essential factors needed for positive changes to take place in the functioning of the mind. and in brain functioning and anatomy. Therefore, it makes sense for a secular person to be interested in engaging in this type of practice.

Dedicated to His Holiness the Dalai Lama, all the great lamas of Tibet, all the great spiritual masters of all time, and to the Tibetan people, whose extraordinary commitment to non-violence is a model for the world. May secular religion flourish for an ethical, compassionate and wise world for all!

----
Secular Religion was translated from the original Hebrew post (with slight changes), published on The Marker Café Current Events Forum, March 12, 2016. (On my Hebrew blog.)
Posted by Janna Weiss at 4:42 AM